by admin@htglobal in Services. Posted December 12, 2019

The e-commerce software startup will operate from a WeWork space at 600 Congress Avenue. It plans to add 40 new sales and operations roles in Austin in the next year, including a director of enterprise sales and a director of partnerships.

Sanchez will lead Bold Commerce’s Texas team, which will be the company’s first hub outside its 350-head Winnipeg headquarters.

Following the company’s $16.5 million Series A in January, Bold Commerce began the search for a CMO and CRO to bolster its marketing and sales efforts, Sanchez said. It hired former Ricki’s president Deanna Traa as CMO and tapped Sanchez in Austin. His hire, combined with the city’s big tech and e-commerce presences, led the company to settle on Austin as the site for its first U.S. location.

“There’s a combination of both talent in the markets and being closer to our partners,”  Sanchez said. “A high percentage of our customers and partners are U.S.-based.”

“That is the kind of product we’re going to be building into and making sure we invest a lot in that going into the future,” he added.

The company has more than 90,000 customers, including Jeffree Star, Zippo and Lucky Tackle Box, and almost 2,000 agency and technology partners. It’s also the leading app developer on online store platform Shopify, according to a company release. 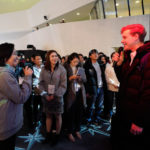